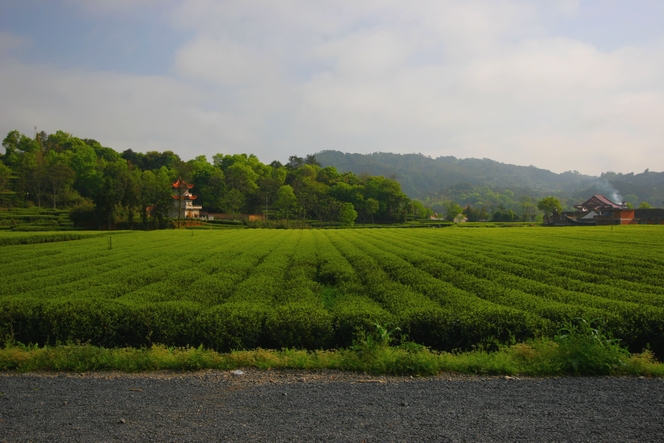 I have just acquired the first flush green teas from China for Le Palais des Thés.
China was the first country in the world to produce tea. It has been growing there for thousands of years. In comparison, India and Sri Lanka have only been producing tea for 170 and 140 years, respectively.

The legend about tea drinking goes back to Emperor Chen Nung, more than two thousand years ago. He had apparently stopped beneath a shrub to take a nap, a bowl of hot water beside him, as it was his custom. A gentle breeze then came up and removed from the shrub a leaf which dared to settle in the imperial bowl. We can imagine a host of devoted servants rushing forwards to change the dirty bowl, rinse it, dry it and refill it with nice clear, rippling water. But the Emperor, just from a sign of the hand, told his servants to stand back, and with a single index finger raised towards the sky, he said these few words:

“From what the Sky sends Us,
Is born harmony in Us.”

The Emperor then lifted the bowl to his lips. He tasted, he drank. He appreciated. He then asked what the name of the shrub was.

And so tea was born.

Let’s get back to our little seed of the tea plant. Once the grower has selected the good seeds, he buries them in plastic propagating bags filled with soil and…

It’s exactly 30 years ago this month that my life changed. Nothing had previously marked me out for a life in the tea trade. Palais des Thés opened its first…

Each tea accessory used during the Cha no Yu (the Japanese tea ceremony) is made using the methods of an ancient craft. Raku is a classic technique often used to…