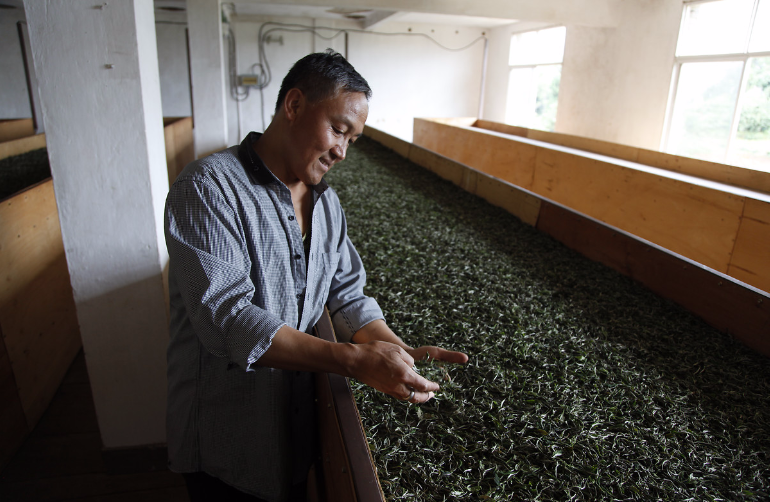 I got to know Xuan Dong Wu this summer. I met him in the Ming De factory he manages and where, that day, he was overseeing the withering of the tea leaves with the greatest attention. Xuan Dong Wu loves his job. He has not always been in the tea business. He started out in the army, and fought in the Sino-Vietnamese War in the early 1980s. He then returned to the village where he was born, and where tea provides the majority of work. He makes white teas, pu erhs, and black teas that are considered the best in Yunnan. He likes to introduce new ideas, and is responsible for several of our Mao Chas, the intermediate teas used to made Pu Erh. Xuan Dong Wu is a shy man, and didn’t say much when I asked him what he wanted me to write about him here. He simply told me about his life, and what he likes. He said he likes making tea with his heart and with his efforts, he said he wanted to do his best and make the best teas possible. And then he plunged his hands back into the withering leaves, and didn’t take his eyes off them.

I’ve just returned from New York, where I gave a tea tasting lesson to 35 journalists, bloggers and students from the prestigious French Culinary Institute. Cyrille and Aurélie Bessière, who…

Tea and rice have a lot in common. Firstly their shades of green, with the occasional touch of yellow, so delicate and varied, so intense. A feast for the eyes….

Wu Long teas from Taiwan are among the best teas in the world. By the way, we will receive beautiful Bao Zhong teas in a few days. However, of that island,…

In China, there are many different ways of drinking tea, as well as a vast array of recipients. The latter range from glass tumblers, which are fairly widespread, to cups…