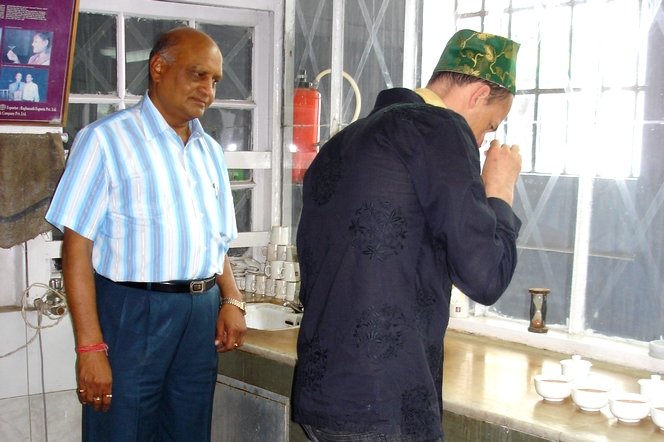 The first Darjeeling flush is delayed for the third consecutive year. This time, the tea plantations suffer from drought: it hasn’t rained in Darjeeling since October 10th, 2009. Surprisingly, the sky is covered with clouds, the Kanchenjunga cannot even be seen. In the few irrigated plantations, the chill prevents the tea leaves from growing. Temperatures are still very low at night and I sleep with a hot-water bottle at the Planters Club!

So far, most of the tea gardens have only had one harvest (DJ1). Normally, they should have harvested enough tea leaves to make around ten lots (DJ10).
The first lot of Darjeeling harvest at North Tukvar has a floral bouquet of much greater quality than other plantations, even the best ones like Puttabong and Singbulli. I didn’t hesitate to buy this tea which is to arrive in Paris this week-end. It’s a clonal mixture of various cultivars. I don’t usually buy tea at the beginning of the harvest, but if it doesn’t rain in the next coming ten days, the amount available will be scarce.

This year, it might be is very small in comparison with previous years. It doesn’t seem to particularly worry the responsible of Puttabong and North Tukvar, Mr Somani (on the photo), who told me with his Indian-like fatalism: “If there’s a storm tea will grow very fast, only gods know…”.

In the south of Sri Lanka, tea is mostly grown by individual farmers who cultivate their own land. They sell the tea leaves just after the harvest, as they don’t…

When you harvest the tea leaves, you must take great care to pick the right parts. Only the tea bud and the two adjacent leaves give you true quality. Sometimes, to prevent…