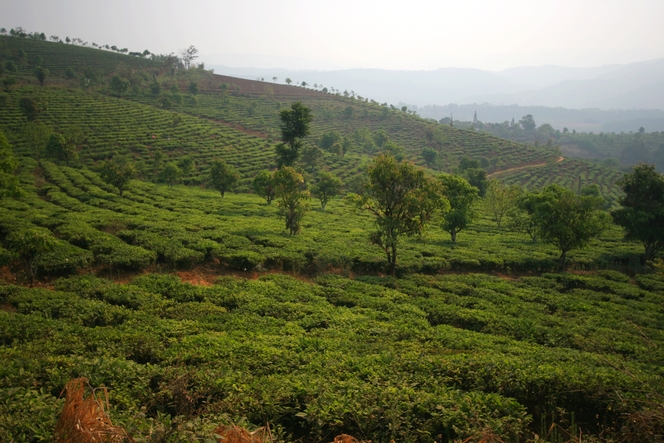 Tea growing has massively increased in Yunnan over the past 40 years. At the time, it was decided to step up production and increase the cultivation areas. And things moved very quickly, like often in China. In a very short time, all the trees were chopped down and not a single one was left. And if the mountains were left in place it’s only because they were not causing any trouble. As you can imagine, the landscape underwent a major transformation: as far as the eye could see, there wasn’t a single copse, not a single tree top, not a single cluster of trees. Just tea plants, wherever you looked.

The result was not only staggering to the eye, but it also had an effect on the soil. Rain became scarce and erosion increased. The result of this large-scale deforestation and years of drought was that yields tumbled.

But the Chinese know how to adapt quickly when needed. So as soon as they realized the gravity of their action, they began replanting trees. It now gives us this lovely landscape, somewhere between Jinghong and Menghai. Note the young trees here and there, bringing shade and humidity to the tea plants and pleasing the eye.

The harvesting of leaves used to make Pu Er is interesting. Here, in the west of Yunnan near the border with Myanmar, the tea plants are left in a semi-wild…

Here’s what a tea plant looks like when it has been left to grow, rather than being kept low so that its buds and shoots can be picked easily. From…

When the village of Hadong (South Korea) holds its Tea Festival each year, the organizers don’t do things by halves. People come from far away to stroll along the aisles…

These days I was nearby Shizuoka, the main tea producing region of Japan. I took this picture in Tawaramine, a highly considered place for growing tea. Beyond the harmonious curve…